​In September, the club demonstrates how corn was harvested using horses. The weather is usually brilliant and spectators are welcome to join in the fun by helping load and unloading wagons with corn stalks that have been cut by horse drawn corn binders.

​In 1979, the Club began sponsoring a fall sale of draft horses and equipment. The purpose of the sale is to promote New York State Draft horses and give beginners a place to buy horses and necessary equipment. The sale is held at the Cortland County Fairgrounds in Cortland, NY, the first week of October, and has grown to a two-day event. The club charges a small commission on all sales to help offset costs. 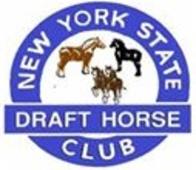 The first event of the year is normally (weather permitting) an old fashion ice harvest in Tully, New York. The Club joins with the Tully Historical Society to demonstrate the cutting and storage of ice. Usually, there’s an ice cream social in July which uses the harvested ice.

​In late March or early April the Club sponsors a Draft Horse Seminar normally held at the Morrisville College campus in Morrisville, NY. Topics include various aspects of horse health and management presented in lecture form. There are also a number of demonstrations and hands-on opportunities presented by Club members. Topics usually include how to show your horse, harnessing, shoeing, and a display of major draft breeds.

​In July, the members gather for a Club picnic usually at a member’s farm. There’s good food and lots of time to swap stories about draft horses. There’s also time for beginners to pick the brains of experienced members. Later in July, club members support the annual Hay Day held in Auburn, NY where we demonstrate raking hay with horses and the use of a stationary baler.

​In August, the club joins with Kings Ferry Historical Society to demonstrate how grain was cut, threshed and the straw baled in the late 1800’s. Horses pull the grain binder and the wagons that are used to transport the wheat to the thresher. There are also free horse drawn wagon rides for spectators.

​In June, Club members meet for a two day trail drive at Brookfield State Park. There is camping, a barbeque dinner, stories around the campfire and fun.

​On the third Sunday in May the Club holds a plowing demonstration at a suitable location, usually in central New York. Teams from New York as well as neighboring states demonstrate the art of plowing with draft horses using riding and walking plows. There are also log skidding and obstacle course competitions and the public enjoys a grand display of how it used to be.